Keep it beautiful
Everything here is my opinion. I do not speak for your employer.
← December 2020
November 2021 →

Anyone who knows me has probably already heard me rant about Crossing the Chasm, my most favourite business book of all time. I love its simple explanation of market segmentation and why the life cycle of a tech startup so often goes the way it does. Reading that book is what taught me that business success is not just a result of luck or hard work. Strategy matters too.

As our company prepares for our chasm-crossing phase, I've been thinking about the math behind why chasm-crossing works and why our metrics plots (doesn't every startup do their key business metrics in R?) look the way they do, and I realized that chasm-crossing strategy must have a simple mathematical basis behind it. I bet I could math this.

And so, our simulated software engineering (SWE) team is back!

In previous episodes of SimSWE, we learned it's objectively good to be short-term decisive even if you're wrong and to avoid multitasking. Later, I expanded on all that, plus more, in my epic treatise on software scheduling. And then, as a bonus, our simulated SWEs went on to buy homes and distort prices in the California housing market.

This time, I want to explore the chasm-crossing process and, while we're here, answer the unanswerable question: what's a bug and what's a feature?

Nobody can agree on what they mean. When does "lack of a feature" become a bug? When a key customer demands it? When the project manager declares a code freeze but you still want to merge your almost-finished pull request? When it's Really Really Important that you launch at a particular conference?

The answer is, users don't care what you call it. Let's reformulate the question.

We need to make a distinction between needs and wants.

Back when I lived in New York, I took some fiction writing classes. One thing I learned is there is a specific recipe for "interesting" characters in a story, as follows: understand how characters' needs differ from their wants. It's rare that the two are the same. And that way lies drama.

So it is with customers. I want a browser that doesn't suck all my RAM and drain my battery. But I need a browser that works on every website and minimizes malware infections, so I use Chrome.

Needs are AND. Wants are OR. A product must satisfy all your needs. It can get away with satisfying only one want, if you want it badly enough.

Needs are roadblocks to your product's adoption. (I previously wrote about roadblock analysis.)

And yet, if you're starting a new project, you can't exactly do 100% of the features people want, all at once. What can you do instead?

Market segments, use cases, and needs

The best (and thankfully becoming common) advice to startups nowadays is to really nail just one use case at first. Pick a want, find people who want it, figure out what those people have in common, call it a market segment, solve the needs of the people in that segment, repeat.

This is all harder than it sounds, mostly because of your own human psychology. But it all lends itself well to rapid iteration, which is why our earlier SimSWE tips to be decisive and to avoid multitasking are right.

Getting back to Crossing the Chasm, the most essential advice in the book - and the hardest to follow - is to focus on your chosen market segment and ignore all requests from outside that segment. Pick one want. Fulfill all the needs.

Let's make a simulation to show what happens if you do or don't. And if we're lucky, the simulation will give us some insight into why that's such good advice.

The plot below simulates a market that with 10,000 potential users, 10 potential wants, and 15 potential needs. Each user has a varying number of wants (averaging 3 each) and needs (averaging 5 each).

Side note: we can think of a "Minimum Viable Product" (MVP) as a product that fulfills one want, but none of the needs. There will be some tiny number of users who have no special needs and could actually use it. But a much larger group might want to use it. The MVP gives you a context for discussion with that larger group.

Before we get to all that deliberate activity, though, here's an example run of the simulator, with random-ish sequencing of wants and needs.

The dim dotted line is the Total Addressable Market (TAM). Every time you implement a want, the TAM goes up. Fun! This is what venture capitalist dreams are made of. All the users in the TAM are "interested" in your product, even if they aren't able to use it yet.

The dashed line is the "unblocked" users. These are users who are in the TAM and whose needs you've entirely filled. They legitimately could buy your product and be happy with it. Assuming they hear about you, go through the trial and sales process, etc. This is the maximum number of users you could have with your current product.

Finally, the red line is the number of users you actually have at any given time. It takes into effect marketing, word-of-mouth, and adoption delays.

I'm already excited about this simulation because it shows how adoption curves "really look" in real life. In particular, you can see the telltale signs of a "real" adoption curve:

Observe also that the jumps in the dotted line (fulfilled wants) are big at first, and smaller each time. That's because each user has an average of three wants, and you only need to satisfy one of them. Because of overlapping wants, the second want is split between new users and users you already have. Each successive want has a greater and greater overlap with your already-interested users, and thus less and less effect.

(Alas, this gives a good mathematical rationale for why "mature" products stop improving. Yes, there are all sorts of additional things your audience might want. But if adding them doesn't increase your TAM, it's strategically questionable whether you should bother. Bring on the continuous improvement debate.)

(On the other hand, this simulation is somewhat unrealistic because of the pre-defined market size of only 10,000 participants. If, instead of fulfilling more wants for your existing market segment, you add a new market segment, those new wants might have a bigger impact and your "big" S-curve might get a newer, bigger S-curve added to it. This is small consolation to your existing users who would like some more stuff added that they care about, though.)

In contrast, the jumps in the dashed line (needs fulfilled) start small and get bigger. This also makes sense intuitively: since users can't adopt the product until all their needs are met, and the typical user has 5 needs, certainly the first 4 needs are going to attract only a small group of less-discerning people. Even the first 5 needs will only capture the group of users with exactly those 5 needs or fewer. But by the time you're reaching the end of the to-do list, every new need is unlocking a big group of almost-satisfied users.

(This part is coool because it explains what startups so often experience: at first, fulfilling needs for your target market creates a small jump in absolute user count. But through this "AND" effect, each subsequent need you fulfill can create a bigger and bigger jump. Even if the new features seem fairly small or relatively easy compared to your early work!)

Of course, that was a single simulation based on a bunch of made-up arbitrary assumptions and some numerical constants selected mainly on the basis of how pretty the graph would look. 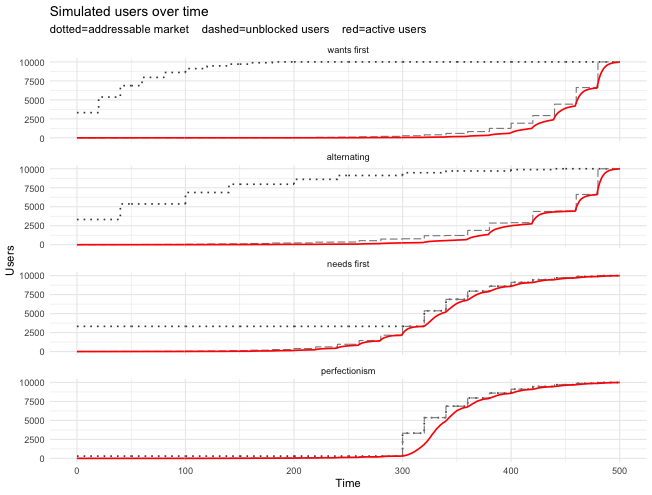 Let's continue to assume a fixed market segment of 10,000 users, each of whom have an assortment of wants and needs.

The four plots above correspond to four ways of prioritizing those wants and needs:

In these plots, the important things to look for are getting more users sooner (money in the bank!) and total area under the curve (aggregate value delivered). Users you get earlier are users who give you money and spread word-of-mouth over a longer time, so they are much more valuable than users you add later.

In this version of the plot, it looks like #3 is winning, #4 is not too bad, and even #2 might be kind of okay. In the end, is there really much difference?

This plot zooms the y axis to the first 1000 customers, leaving the x axis unchanged from before. Now the differences are more dramatic. 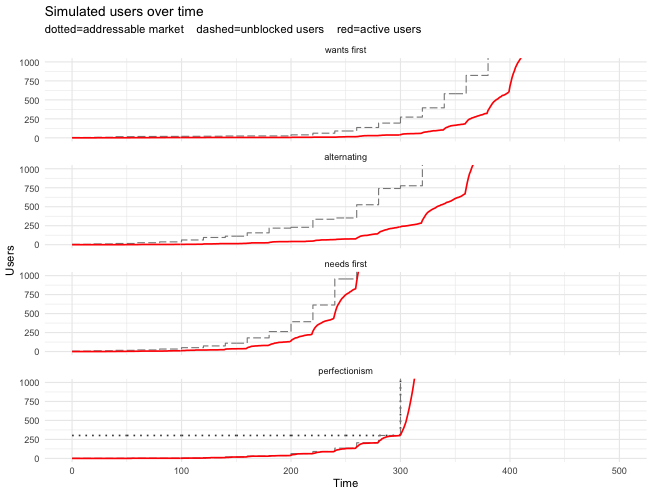 Here you can see that needs-first starts attracting at least a noticeable number of live customers at time 150 or so. The others take much longer to get rolling.

This feels intuitively right: in the early days of a startup, you build an MVP, nobody uses it, you find a few willing suckers early adopters and listen to their feedback, fix the first couple of roadblocks, and now you have a few happy niche users. If all goes well, those users will refer you to more users with a few more roadblocks, and so on. At that stage, it's way too early to worry about expanding your TAM.

What I find exciting - but not all that surprising, having now immersed ourselves in the math - is that the needs-first approach turns out to not be a compromise. The word-of-mouth advantage from having zero-roadblock, excited, active users early on means the slow part of the exponential growth can get started early, which over time makes all the other effects look small. And each successive fulfilled need unlocks an ever-greater number of users.

In contrast, you can see how increasing the TAM early on has not much benefit. It might get your investors excited, but if you don't have live users, there is nobody to spread word-of-mouth yet. Surprisingly little is lost by just focusing on one small want, clearing out roadblocks for people who want that, and worrying about the rest later.