Je me souviens
Everything here is my opinion. I do not speak for your employer.
← October 2010
November 2010 → 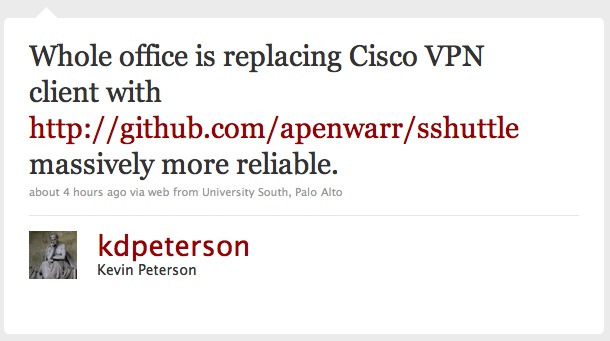 I know there are quite a few people who will be as happy to know this as I was. Thanks to a helpful contributor known only as dkf, I've now added the magic incantation (namely, sysctl -w net.inet.ip.scopedroute=0) that's needed to make ipfw transparent proxying work on MacOS 10.6 Snow Leopard. I don't know what it does, and I don't care! All I know is that sshuttle restores it on exit to whatever its previous value was :)

This means you, as well as I, can now use a Macbook to VPN into any network that gives you ssh access. That's a lot more helpful than always having to do it from a Linux VM.

Why sshuttle is awesome

For those who are just joining us, sshuttle provides VPN-like connectivity using a plain ssh connection, without needing root access (and thus the admin's permission) on the server side. Basically, it makes a transparent proxy server on your client that automatically forwards through an ssh tunnel.

Compared to ssh's built-in port forwarding and tunneling and socks mode, sshuttle is better because:

And although ssh forwarding also has the following, not every VPN package does. It's worth pointing out that sshuttle is awesome because: